Badminton is upon us! The most exciting weekend in the eventing calendar.

We are currently on the morning of cross country day. I will be heading out to the course today to watch the best horses & riders in the world compete for £100,000 prize they will receive and of course a lot of kudos if they are crowned the winner at Badminton.

I absolutely love the thrill of cross country. It makes me nervous just watching these horses and riders leap over the gigantically frightening jumps. Part of me thinks the riders must be mad and part of me wants to have a go myself!

I am very excited to see the top riders compete today. I am a frequent visitor to Badminton as I was lucky enough to grow up 20 mins down the road and I think Badminton is still my favourite weekend of the year as I love it more and more each year. I’ve missed the last few years, due to living in France now but enough was enough and I needed my Badminton fix!

Photo by William Carey for The Gaitpost

Currently in the lead and in second place is Oliver Townend. Now, I’m sorry but I am not a fan of his. Despite his very successful career I cannot get past his numerous tellings off from BE about the way he rides and treats his horses. To me he seems overly competitive to the point that he will risk his horses welfare to win. Simply put he is a great rider but I do not think he is a good horseman. I wish him not harm but would prefer it if someone else won! Although he has broken the record this year with the best dressage score in the history of Badminton, which does put him in a very strong position.

The riders I will be cheering on are…

For Great Britain, Ben Hobday. A popular choice, due to him being very charismatic and seemingly good guy who loves his horses and is a cancer survivor – what a hero! He is currently in 23rd position after the dressage. I will be cheering him on for sure!

My other fav is Emily King, daughter of everyone’s heroine Mary. I just think the King’s are great riders and horse women. I am part of Emily’s Team Hobby syndicate and I wrote one of my first ever blogs about that. I plucked up the courage to send it to her and she emailed back saying thank you for writing a great blog! How nice is that?! She is currently 21st on Dargun.

I will also be cheering on Clara Loiseau of France (my home country these days) as I saw her compete at Pau last year, where she came 3rd. She is an upcoming rider that I think will do well. She is currently lying 41st on Wont Wait.

I hope everyone has a great weekend watching Badminton there or at home.

Who do you want to win? Let me know in the comments!

This is the second stud that I visited on my summer travels this year in France. It is situated in the centre of La Roche Sur Yon, roughly an hour away from La Rochelle.

Built in 1665 by Napoleon to breed horses for the military, Le Haras de la Vendée is now used for cultural and tourist purposes.

We explored the grounds when we were there and there is a lot to see. We were able to see the stables and grounds and see the ‘ exposition de voitures et hippomobiles’ which are the old cars and carts. You can see them displayed with information about when and why each one was used. My hubby liked this part!

The grounds were pretty and you would never think you were in the middle of the city. There were pony rides available all day for children (some in costumes) . Guided tours are available 3 times a day, which I would have liked to go on. You can also go on a pony & cart ride. There were also many educational talks and tours available on specific days including an old photo exhibition, how to tack up a horse , working sessions with commentary, question and answer sessions and a saddlery workshop. How very educational!

In the summer there is a ‘Grande Spectacle’ each day at 17.00. With a multitude of scenes in costumes, to music telling the stories of horses through out the times. The horses pirouette and jump and the reviews I have read say it’s brilliant. There is also Cachou the circus horse, which is a funny show aimed for kids. 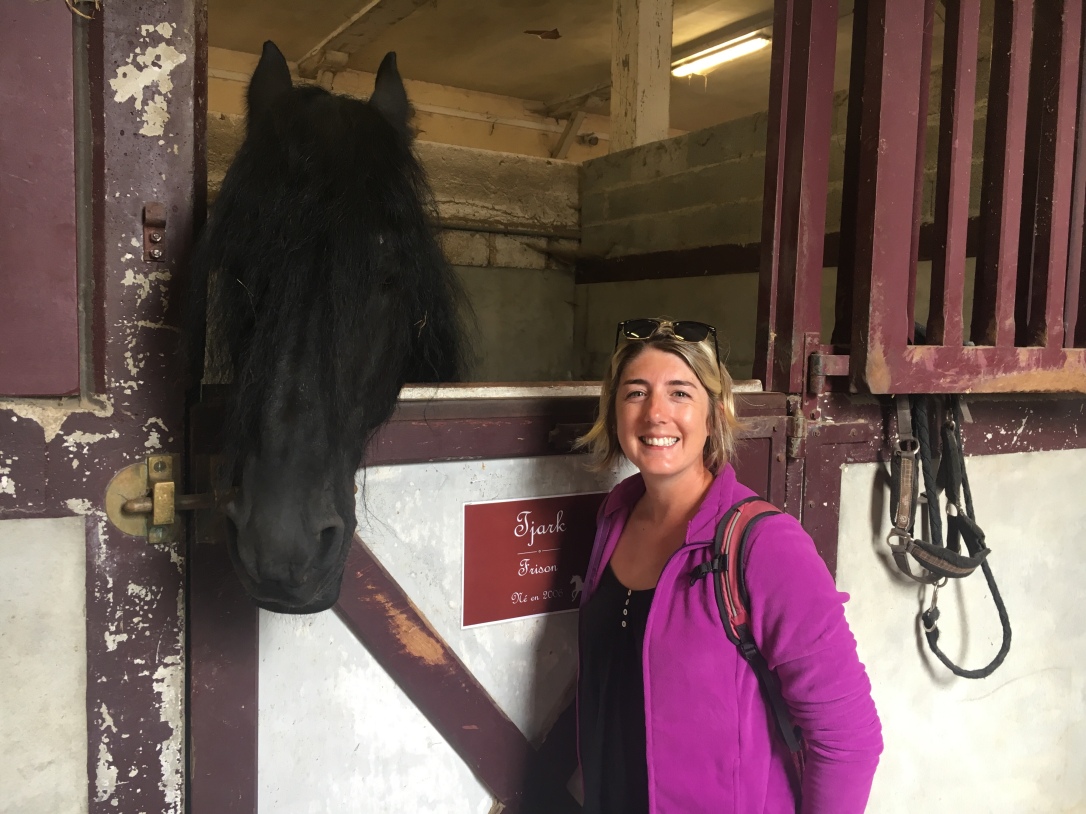 If you get a chance to visit one of the National studs in France I would recommend it. There are 22 National studs around France, which make up along with the National riding school the Institut Français du Cheval et de L’ Equitation. It’s certainly something I will try to continue to do as I luckily stumbled across the studs in Tarbes & & Vendée and enjoyed both visits. Both I have visited have been very informative and interesting but good fun too. I would say the stud in Vendée is not as grand as the stud in Tarbes, but both have a lot to offer. Both centres are used for tourism but also for research in the continuation of breeding and for shows, competitions and education. Both were really child friendly too. Entry was €5 for the whole day which included everything I mentioned above including entry to the spectacle. It’s really good value!

Do you know of any horsey places or events I should visit in France? If you have stumbled across any gems whilst on holiday etc let me know as I am always looking for new horsey places to visit. Please let me know in the comments if you do.

Also don’t forget the In Due Horse Christmas party is going on at the moment on Facebook and Instagram. Send your Christmassy pictures in to feature on the page. Just remember to tag @induehorse & use the hashtag #induehorseparty.

I recently had the pleasure of visiting The National Stud in Tarbes. Or Haras de Tarbes as it is known in French and it is beautiful! Tucked away in the city centre of Tarbes, which is in South West France on the edge of the Pyrenees mountains. You would never expect to find such a large beautiful equestrian centre as you navigate through the busy streets of this busy french city. But when you do find it you are in for such a treat!

So, a bit about the stud. The National Stud is actually classified as a historical monument. The stud was restored in 1806 by Napoleon to house stallions to produce mounts for the cavalry. It was successful as the stud actually provided 35% of the horses that were used in the light cavalry at that time. Today however the facilities are used to develop the horse industry here in France.

Now that is interesting, but on the tour what they are very interested in telling you that Haras de Tarbes is the birthplace of the Anglo Arab (Thoroughbred x Arab). This breed is common all over the world but the French have made it popular. These horses have excellent qualities as they have the characteristics of an English Thoroughbred who are fast and agile and an Arab who have immense stamina.  So with all that combined they really do make brilliant sports horses. Anglo Arabs were first bred in France in 1836 under the control of the National Stud Service. They are the 3rd oldest breed in the world and the have the 3rd oldest official stud book in France.

When we arrived at the stud I expected to see lots of mares and their foals but I was wrong. Today the stud is used for developing the horse industry by working on such things as the selection and preservation of breeds, research and experimentation, encouragement of the sector, technical support for the implementation of horse projects and horse trades training. 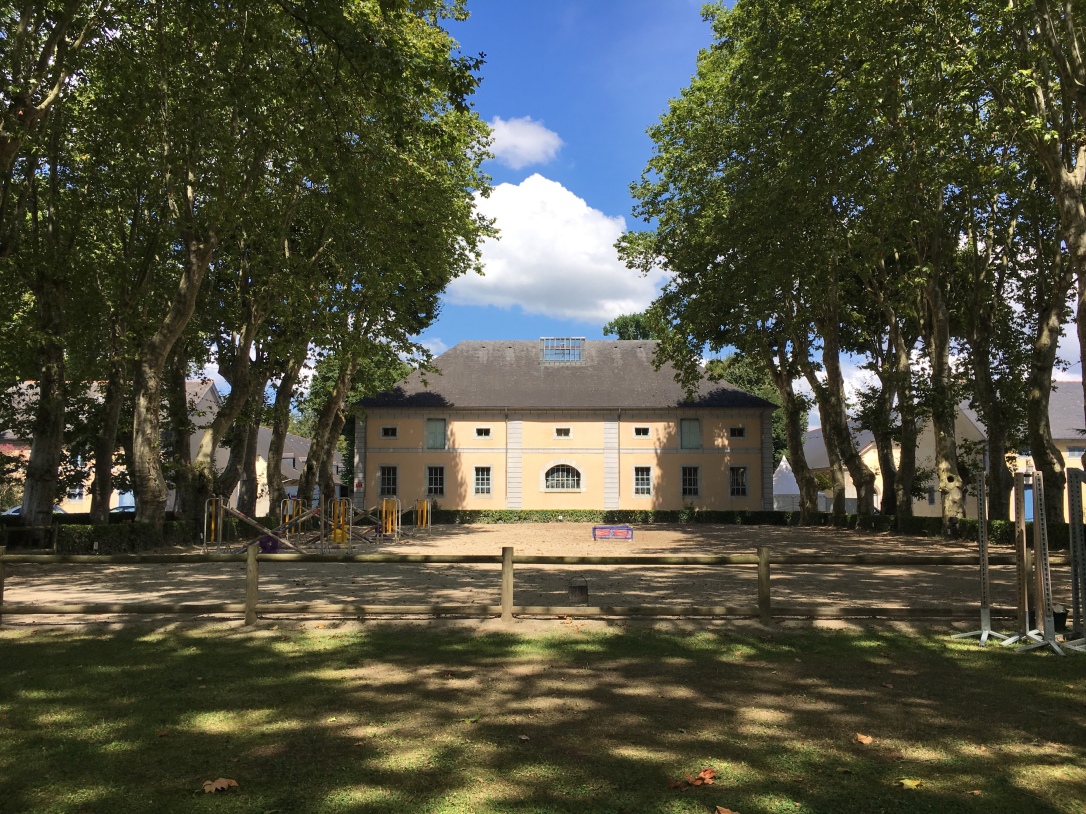 In 2006 the 1st regiment Paratroopers set up a military equestrian club at the stud with 30 horses and military personnel. This includes a programme that supports injured soldiers. There is a therapeutic programme that offers equine meditation for soldiers that suffer with Post Traumatic Stress Disorder. There is also an adapted sport programme that are riding lessons for military personnel that are in the process of physical or mental recovery and there is also an ambitious sport programme for soldiers that would like to train with support of the Federation Français d’équitation (the national federation for equestrianism) to get to the para olympics.

The equestrian centre is very beautiful even just seeing the old buildings and stables set amongst the trees is very special. It still feels very grand and when you are there you do not think you are in the middle of a busy city! We arrived without booking on a Saturday afternoon. Me, my husband James and our Jack Russell Ziggy were all welcomed and shown to the little museum where they were playing videos of their big summer show as we waited for everyone to arrive for the guided tour. The tour guide was very nice and spoke English and French. The tour we took was in French but he spoke English to me and said that if there was anything I didn’t understand he would happily translate for me. Tours can be done in English if you pre- book.

As it was Saturday we benefitted from a farrier demonstration on our tour. We were shown how he makes horseshoes, shown different types and how they are fitted. My non- horsey husband James particularly enjoyed this part.

After the farrier demonstration we were shown around the stables. Each stable block had different types of horses in them. When we visited we saw the military equestrian club, another stable block with former police horses in and a few Anglo Arabs. The stable blocks were beautiful. On the guided tour you are shown around the whole site and can see all the original old buildings still being used. We also got to meet some of the old and very young horses who were out in the paddocks.

The stables and yards were so clean. They showed us how they had made a specialised system to help them muck out. Each stall had a trap door at the back where you would place all the muck you want removed through the trap door. From there a conveyer belt would sweep all the muck along to one big pile a the end of the yard – genius huh? I needed that when I worked at a riding school! 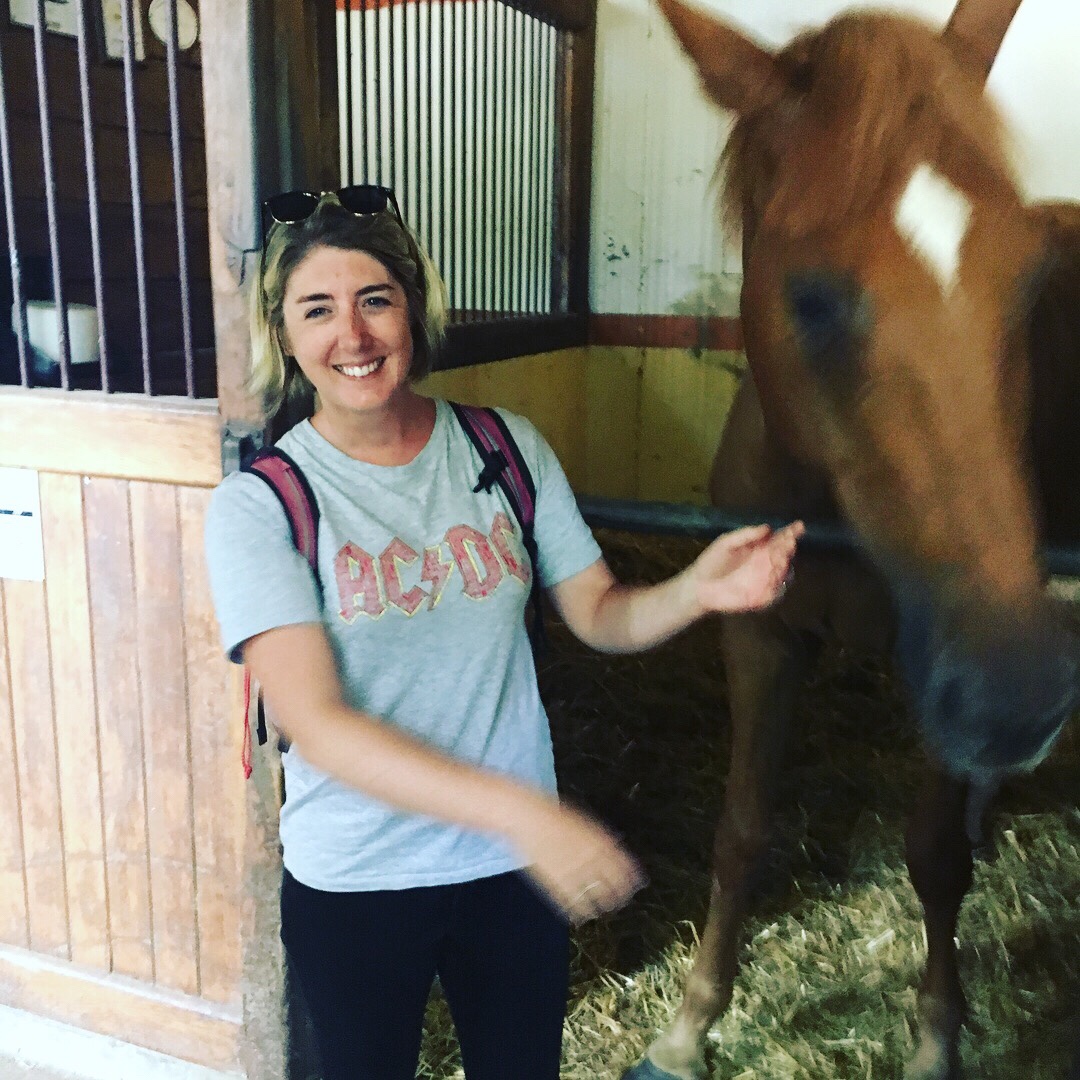 If you are ever in Tarbes, I would throughly recommend a tour of the stud. It really is special. The tour is informative and full of history but it equally as interesting seeing the stud and what they are doing there today. Most of the people on the tour weren’t horsey and my non horsey hubby enjoyed it so it is suitable for everyone including children.

I have read since my visit that the council have bought the stud and plan to invest more money into it creating a public garden and a gourmet restaurant so it sounds like it is getting to get even better!