I wanted to get round to telling you all about my first riding lesson in many years. This something that had wanted to go and do for a long time,  but as I now live in France I was frightened of going incase I couldn’t understand anything the instructor said. Like most people when they start speaking another language, some days I feel fluent, like I can understand anything or there’s those other days that I will make one tiny mistake or not be understood & then think how stupid was to think I can speak French! So going for a lesson to start with was quite the personal achievement.

I picked a stables near where Mya is kept. It was familiar and I was able to book online. The yard is called Encayla. My friend Nic came with me for moral support as she was familiar with the yard as she had previously had a pony on part loan there for her son Jake to learn to ride. Handily Nic is also an ex riding instructor.

The day I went for my lesson, the weather was apocalyptic. Storms and heavy rain continued throughout the day. Marion my instructor had text that morning asking me my size and my riding ability so she knew which horse to put me on. So I knew the lesson wasn’t cancelled. That would have been a good excuse not to go!

We arrived at the yard and the weather seemed to break. I was told I was riding Campa, who to me looked like a big pony. Pretty looking horse but seemingly quite nervy. I was regretting telling Marion that my riding was ‘ bien’,  when I needed to ask Nic to help me tack her up. (At french riding stables you come 15 mins early to brush and tack up the horse you are riding). Campa just seemed nervous or excited, moving around, pawing the ground which was making me a bit nervous too now. Gulp. I tried to be brave so I didn’t look like a complete wimp in front of Nic. 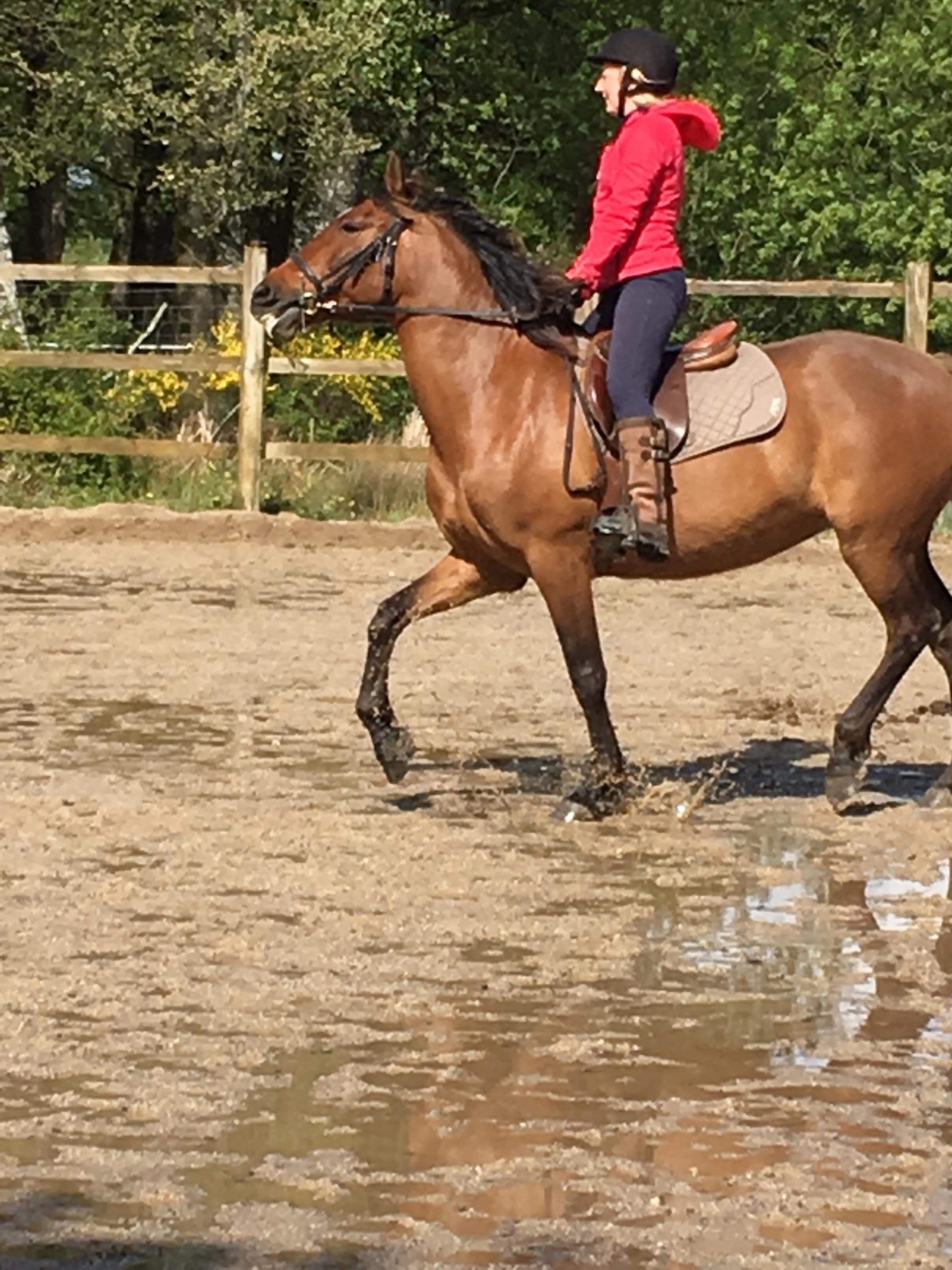 It was time to get on. I led Campa to the smaller arena. There was stuff everywhere. Cones, poles, whips & jumps. But it was only me riding so I tried not to let it bother me. I got on and Campa felt so tense! She felt like a coiled spring ready to explode but I didn’t know how. As we started to warm up Marion told me that Campa does not like any contact on her reins and that I must ride with loose reins to keep her calm. This to me was the opposite of I wanted to do. However I did what I was told. Half relieved that I could understand what Marion was saying to me and half relieved that Campa hadn’t galloped or bucked me off yet.

Marion was right, we walked and trotted and Campa became more and more relaxed. She quite quickly settled down, and riding her with loose contact actually started feeling normal. I no longer had the urge to shorten her up to gain control as it was not necessary. Campa was doing everything I asked of her. I realised as I riding that Campa that my tenseness is the exact same thing that happens when I ride Mya. Mya is strong and can lean on my hands, and instead of pulling her up (which only occurred to me to do after Katie telling me recently) I just get more and more tense.

We went into canter next, and it was so interesting as Campa was very responsive, however when I asked for canter she wouldn’t. Marion said it was because I was too tense and blocking her & you know what it was true! Exactly like when I ride Mya I was a little worried about going into canter. As Mya has a tendency to run across the middle of our enormous arena bucking if she is feeling particularly naughty. I reminded myself that probably wouldn’t happen now and kicked on. Campa was good as gold. No bucks, no gallops. I actually felt a bit silly for being worried about cantering. Nic gave me an encouraging ‘go on’ from the side of the arena and on the other rein we were much better. We then did some walk to canter transitions to help me with my canter transitions and that was good fun. Marion reminded me to keep my reins loose to keep Campa calm and we went for it! By this time I had begun to trust Campa and had relaxed a lot. We did lots of walk to canter transitions on both reins and Campa did them brilliantly responding exactly when I wanted her to.

We finished the lesson and I felt so pleased. I just got Campa back to her tie up paddock (which was covered) and the rain absolutely poured down again. I was so lucky that my hour lesson had been dry.

I realised that I had brought along my insecurities with Mya to my lesson with Campa. For someone that had never suffered with nervousness when riding before. I was relieved that by the end of the lesson those nerves had vanished and I was enjoying riding like I should be! I didn’t realise how nervous I had become riding Mya. I had a few incidents with Mya in hand since Christmas. That involved her rearing and bolting a few times on separate occasions that I had admitted had frightened me but I didn’t realise I had let that worry join me in the saddle too.

But I am delighted to report that since that lesson I have ridden Mya on several occasions and have not been worried. I have been firmer with her, as I now realise I think she was being naughty sometimes when I let her be. She would spook constantly when being ridden in the arena and since my lesson I have found some renewed confidence and she has not spooked once. 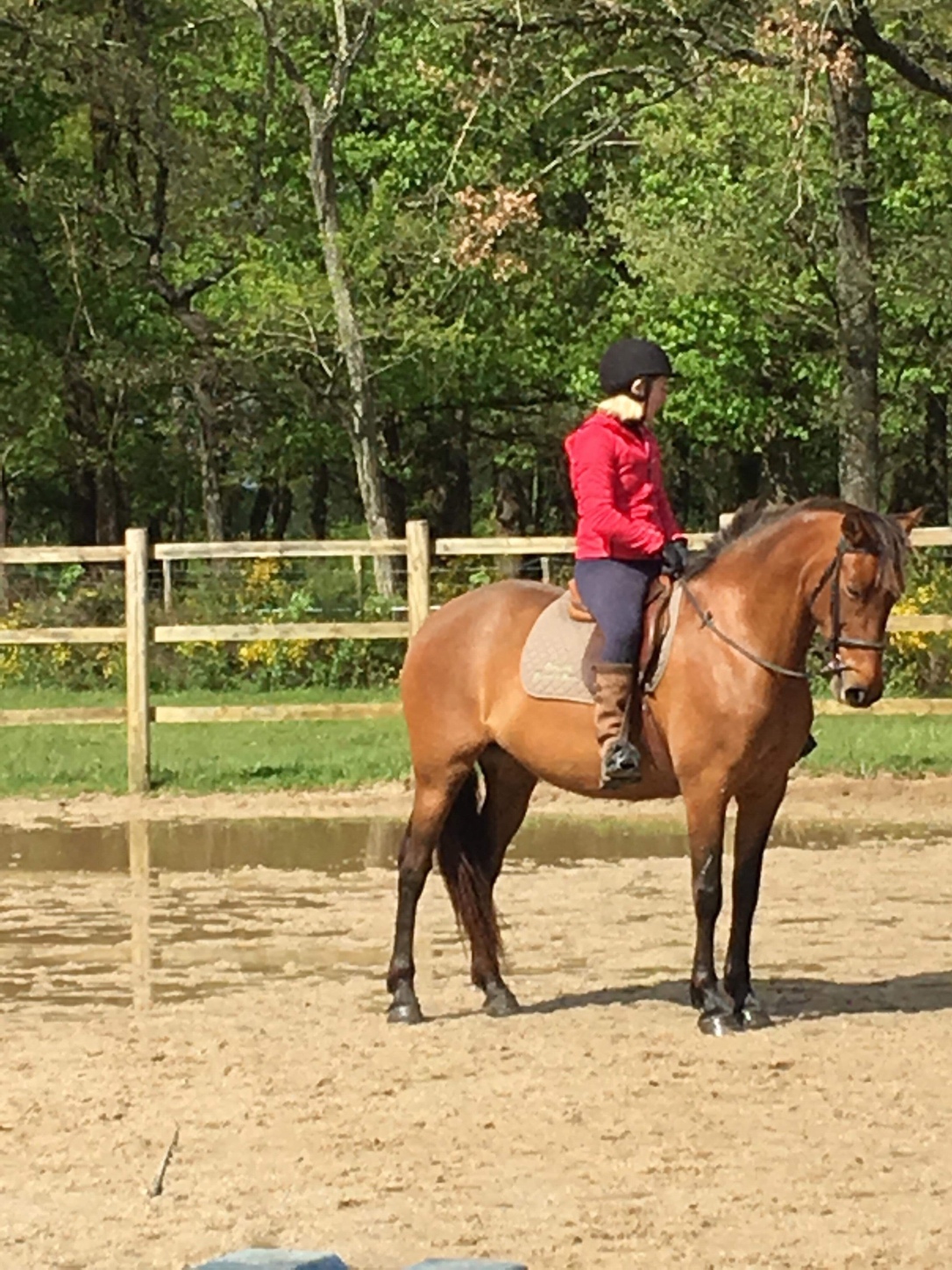 I will be certain to book more lessons in the summer. As I really enjoyed it, I liked my instructor and I cannot explain fully how much it has helped me. It took going to ride another horse for me to have a little epiphany about how I had let the fear take over with Mya. The change since that lesson has been incredible. I didn’t want to admit that I was starting to feel nervous every time I went down to see Mya, worried about what she was going to do. I had lost all my trust in her, and I think that lead to her not trusting me either. Mya needs a firm hand, as she can be nappy and spooky. After riding Campa, I realised that I do know Mya and can predict what she will do and that actually I do trust her to not be  a complete idiot all the time. Since then each ride we have had has been so much better!

I am an English girl living in France. I have loved horses forever & started riding when I was 5 years old. I have had my own horses in the past and am currently sharing a gorgeous bay named Mya. Other than horses I love dogs (I have a Jack Russell named Ziggy). I also love wine and Cadbury’s dairy milk chocolate, Netflix documentaries and watch far too many baby goat videos. View all posts by Louise Dando

1 thought on “The Lesson That Changed Everything!”