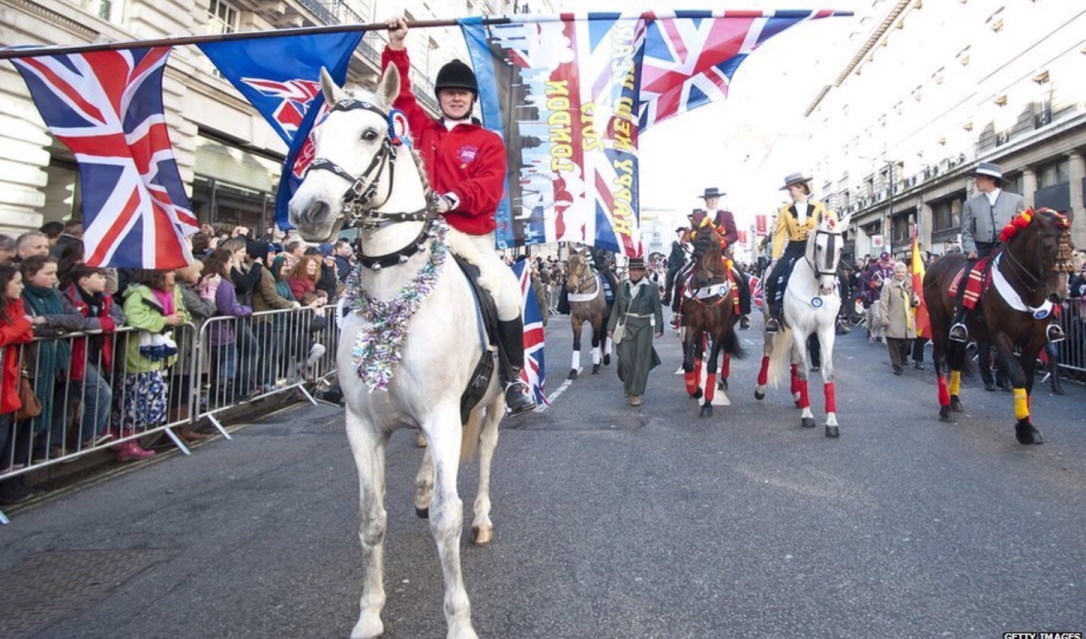 It’s January 2019 – how did that happen?! I don’t know about you but after the festivities of Christmas and the new year are over I find January a bit miserable. However this year I am determined to change my frame of mind about that and how better to do that? By learning about a parade of horses walking through London! I know that would cure my post New Year’s Eve hangover for sure!

The first New Year’s Day parade was in 1987 and it has run every year since. It features marching bands, cheer leaders and street performers. It was intended to bring joy to an otherwise dull day in London as traditionally all the shops and restaurants are shut on New Year’s Day. All the Queen’s horses are a small part of this big parade but obviously they are my favourite bit. The horses have been included in the parade since 2012, when they were first invited to join the parade because of the Queen’s diamond jubilee and the olympics that year. The horses proved to be so popular they have been invited back each year since. 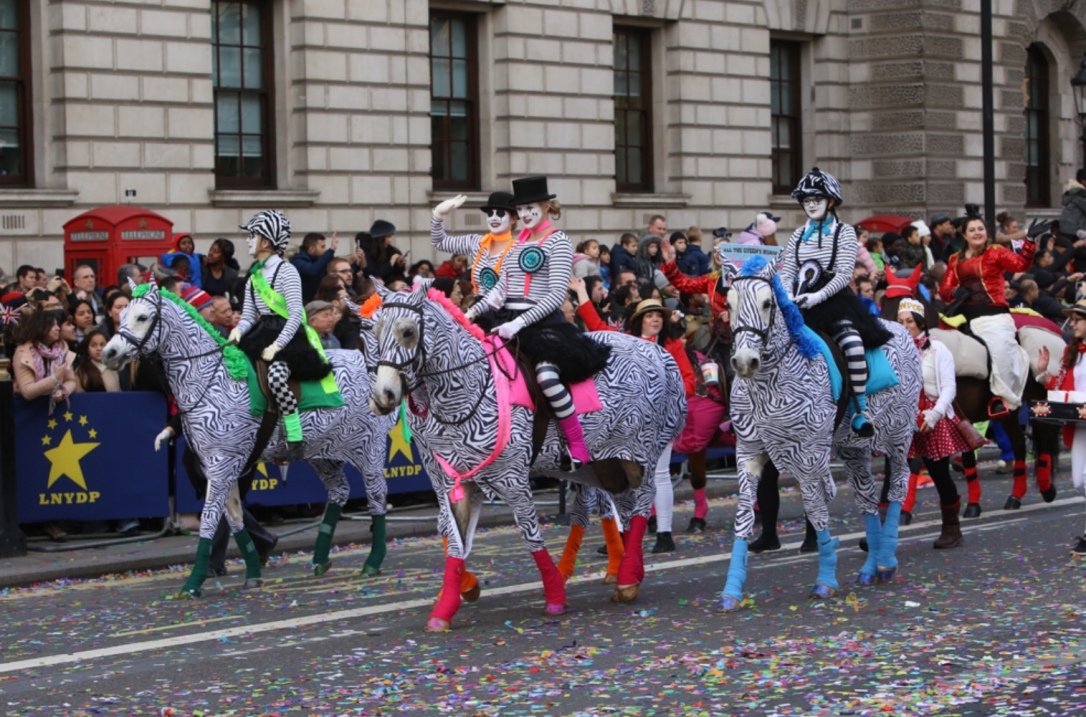 Each year there is a different theme and on average each rider spends around £1000 on their costume for themselves and their horse!! The theme this year was ‘London welcomes the world’ which was a little ray of light in the time of brexit negotiations (or lack of) bringing the country down. The parade features 60 horses and their 200 handlers and helpers and were lead by a 32″ tall Falabella stallion called Azlan, who is an old pro as this year was his 3rd parade. The parade marches through central London from Piccadilly to Parliament Square with around 500,000 spectators. The parade includes horses and riders from all over the world including the USA, Spain, Norway, Holland and Germany. All different breed of horses are included Clydesdales, shetlands, ex racehorses and Dales to name a few. The youngest rider was 3 years old and the oldest 74 years old. 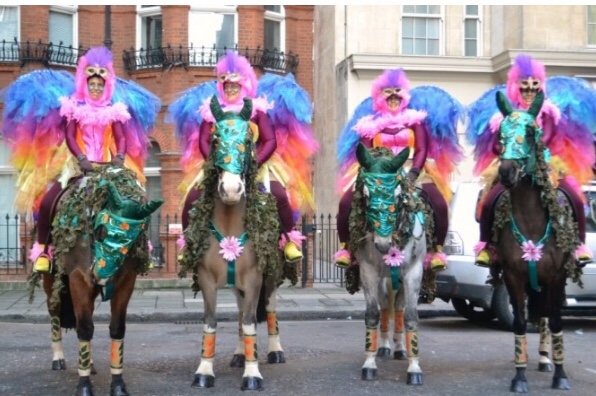 So, when it comes to horsey festive fun it seems London is the place to be. Following shortly after Olympia it seems London knows how to throw a horsey party! I have yet to see this for myself but I definitely want to now! You can contact the organisers of ‘All the Queen’s Horses’ part of the parade and ask to take part if you and your horse want to get involved, via http://www.allthequeenshorses.co.uk and you can spread a little joy yourself. Personally I’m not sure Mya would be too keen though! 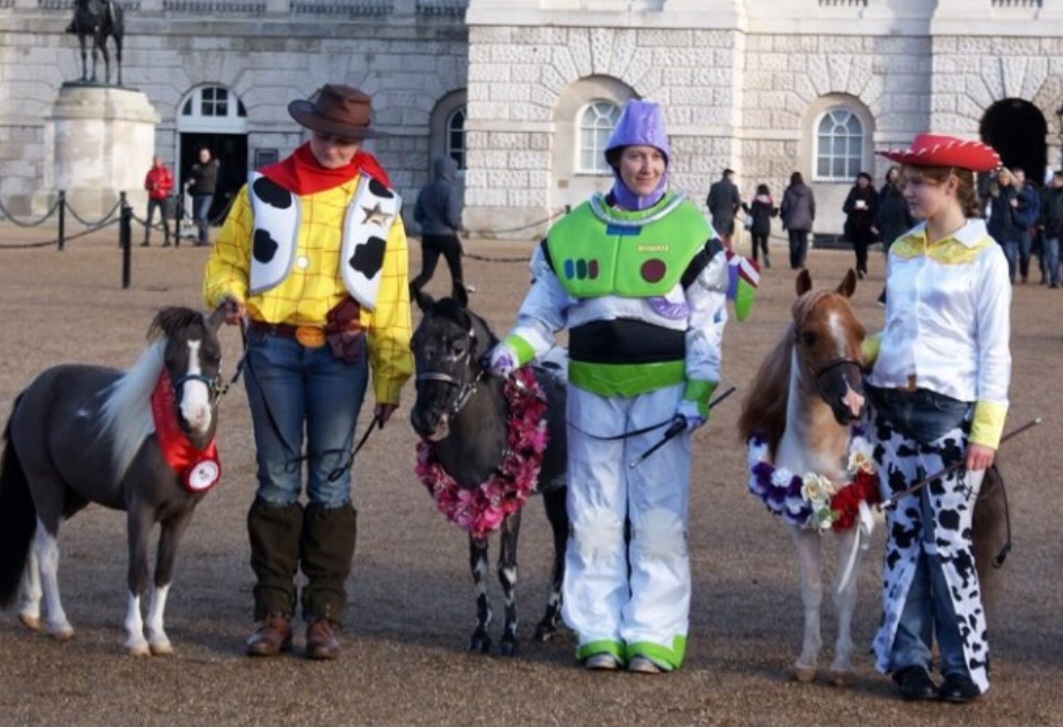 So when you are feeling down this January forget your January blues and just think of horses parading around London dressed up in silly costumes! I know I will. Happy New Year everyone and I hope that 2019 brings you everything you hope for.

I am an English girl living in France. I have loved horses forever & started riding when I was 5 years old. I have had my own horses in the past and am currently sharing a gorgeous bay named Mya. Other than horses I love dogs (I have a Jack Russell named Ziggy). I also love wine and Cadbury’s dairy milk chocolate, Netflix documentaries and watch far too many baby goat videos. View all posts by Louise Dando

12 thoughts on “All the Queen’s Horses in the New Years Day Parade.”